Snatching 10 minutes here, and 10 minutes there (and a whole half hour after I finished working last, before I started hand sewing for work), I've got a little more done on these.

I've now cut out the interlining, as well as the outer layers - I've tweaked the Victorian pattern that I'm using a little - other than the updating to a modern sizing that I'd already done, obviously.

I've raised the centre front a bit, and squared it off, and dropped the top of the centre back.  I've rounded off the botton of the CF, and taken the bottom of the CB down to a point.  I've also lengthened it very slightly, and shaved a little of the bust space out from the front, to make it a smidge more 'pushy-uppy'.

And this is the result - one half all cut out: 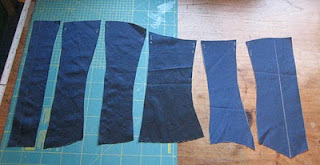 The dress...
I've cut out most of the bodice now - only the centre front panel remains, with which I'm still experimenting.
And I've cut the satin layer of the skirt too. 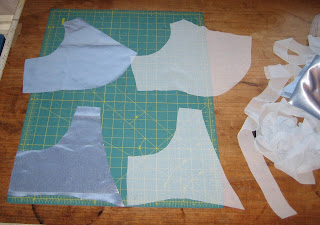 This is the bodice - front above, and back below - the back satin and georgette layers are exactly the same - with the front the georgette has a little more allowed for gathering over the bust (I didn't do a separate pattern for this, but just allowed for it when I was marking out before I cut it).  On the right of the picture are some strips of georgette that will make up the straps. 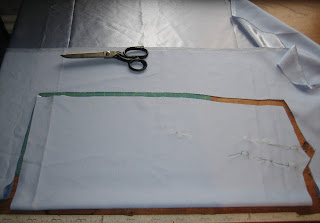 The front of the skirt - the dart is deliberately at a funny angle, and it's cut to the fold (the dart is marked with tailor's tacks). 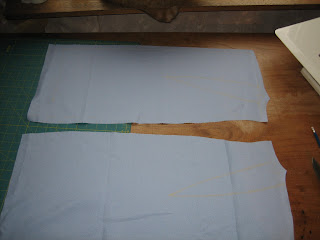 The back of the skirt - again another funny angle for the dart (I like trying out different things).  It's marked in chalk here, although I have now used tacks again.
And that's as far as I am so far!
Posted by Deborah Lough at 4:58 pm No comments:

A very quick post (because I'm running late today) with more about both the corset and the dress I posted about yesterday.
The dress is, as I said, in a crepe sating that I already had - and with a georgette overlay.  Both of these are light blue - the georgette is ligther (in colour) than the satin (it's a given that it's lighter in weight!).
These are they, side by side. 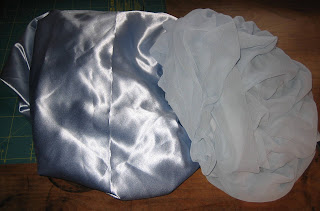 The pattern for the under (satin) layer is all done - it's cut to fit the stand tightly at the moment - I'll be adding a little (not too much) ease into it when I cut it in the fabric.
Here are pics of it (in paper) on the stand in the corner of my sewing room.  The white lines on the dummy are the narrow bits of tape marking out the design lines.
It's not cut to the full length it'll be - though it's not meant to be long, it'll be a little longer than the almost micro mini length it is at the moment.

The corset is well on it's way too - I've cut it and started making it up - I have less photos of that, but the fabric I picked is a dark blue (shot black) taffeta that I've had for a while. 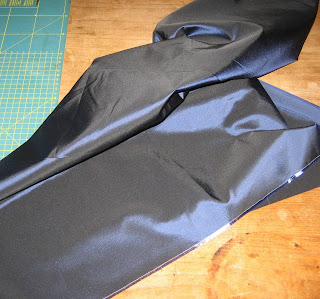 The braiding is going to be done in a silver twist cord.  Now, yes, that means it's going to be more difficult to do...  I looked at black russia braid, but don't have enough that's not already spoken for - and I looked at silver, but it was much too shiney and looked tacky - the silver twist is a bit duller, and it goes well.
I haven't picked the buttons yet, and may well sort those out at the weekend or later - they don't have to be added till the corset's nearly finished, so it's no biggie.
The interlining is a cotton / linen (union) canvas that I have left over from something else - not decided on the lining yet.
Posted by Deborah Lough at 2:12 pm No comments:

And another that I designed more than a year ago and haven't got around to yet (although the design has already changed a bit in the working, as usually happens with me...).

This is the design (design right me, clearly!).  (Ignore the dodgy face - I've given up doing faces on sketches, because I am, and always was, rubbish at them, and no amount of guidance from my design tutor ever helped.) 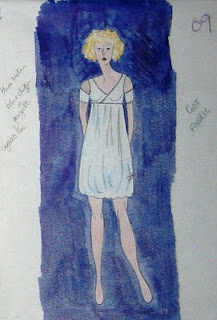 The fabric I'm using for this one is a crepe backed satin, quite a heavy synthetic one, because I had it in - if I were buying the fabric I'd be using a silk).  And the overlay is a georgette, so a crepe weave again.
So far I've cut the pattern, on the stand, which I'll be photographing later on and posting.
Posted by Deborah Lough at 3:26 pm No comments:

Today's my birthday, so I'm doing stuff I want to, rather than stuff I have to.

I designed this corset (or pair of corsets - one's under and one's over bust, obviously), last year, but haven't got around to making it yet.  (The photo file tells me I photographed it at the start of January 2010, though I'd designed it over Christmas).

So I decided that today's the day!

The actual design is based loosely on a rifles dolman (Napoleonic).

So far today I've done the pattern for the overbust version (in a basic sample size 12, because I already had a block to adapt in that size).

I now have to work out what materials I'm using - the braiding will probably be a russia or tubular, and the outer fabric either a wool or a silk.

So the next step, this afternoon, will be to go and find the fabric and get on with it!
Posted by Deborah Lough at 3:17 pm No comments:

Some stuff from last year...

Ok, I haven't posted in a while due to being lost in an ocean of padding for the last few months.   (It's ok to make, but dull as dishwater to write about).
Then it occurred to me that I have this huge pile of stuff from last year and the year before that I could write about instead (till I get back to making something vaguely interesting).
So first up is the table cloths.  'Yawn', I hear you cry!  But these aren't just plain basic table cloths - these are pirate flag table cloths!
They're all made in linen, and the detail (the pictures) are all cut out of more linen, and sewn onto the ground.  That bit was interesting when I got to the teeth! 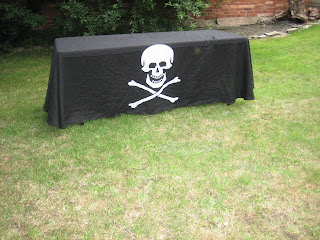 This is a generic skull and crossbones, or 'Jolly Roger', used at some stage by most pirates that were operating in the 18th century.  The name Jolly Roger is thought to derive fromthe French 'jolie rouge' (or 'pretty red'), the name given to the red pirate flag.  There is an extant flag with a red ground, and a yellowish (possibly originally white) skull and crossbones. 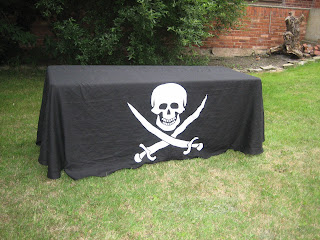 This one is the flag used by 'Calico' Jack Rackam, and English pirate sailing in the East Indies in the  early years of the 18th century.  Obviously, it's basically another take on the Jolly Roger, but with crossed swords instead of bones. 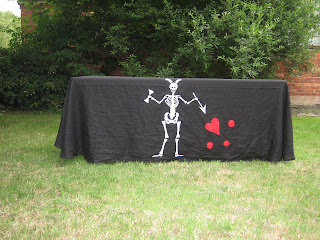 This one is reputed to have been used by one of the most famous (and most feared) pirates of them all, Edward Teach, or Blackbeard.  There's some debate over it actually having been used by him, but it's an interesting design none the less.
The designs on pirate flags actually have a meaning - a language if you will.  The appearance of a skeleton or skull and bones is a warning to unsuspecting crews that death is on it's way.  The hourglass signals that time is running out.  If it has wings attached, then it inidcates that time is running out quickly.  And if red appears on the flag, either as part of the design or as the background, it's a sign that no quarter will be given (i.e. that no prisoners will be taken).
So Blackbeard's flag reads that death is coming, time is running out, and that no quarter will be given to anyone on board a captured ship.  In reality, (where Edward Teach was concerned, at least), ﻿this was bravado and show - about striking such fear into people's hearts that it made his job as a pirate that bit easier.  There are no known accounts of Edward Teach ever killing, or even harming, anyone robbed by him or his shipmates. 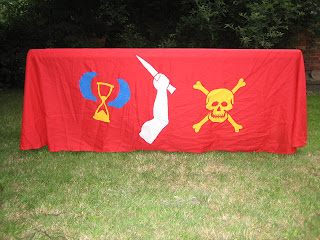 The last of the pirate flags I made is almost certainly mythical, (dating probably to a book from the 1920s) but again, it's an interesting design, and I used it mainly because of the red ground (which as mentioned above, was used).

This one is supposed to have belonged to Captain Moody (if it existed, which as said, is questionable - he's often associated with Christopher Moody, although they were separate people).
The translation of the flag - the arm with a knife is said to mean that force will be used - the skull and crossbones that death is coming - the hourglass that time is running out - and the wings that it's running out fast.

Definitely an interesting project (and it gave me the chance to do some piratey research).
Posted by Deborah Lough at 2:23 pm No comments: