...has been a strange, disjointed sort of week.

I started working, properly, late this year, on account of catching flu (again - or at least a very heavy cold that was barely distinguishable from flu).  Anyway, as of last Monday I'm back at work.

So this week I've been catching up on some stuff - sending out deliveries, a client meeting, finishing some stuff off, and starting on the years work properly.

At college, I've finally pinned down my design for the Feltmakers Competition, (more of that in another post), and have either got or ordered all the materials.
And we were given another brief (number five) - a short illustration brief, which is all tied up with the feltmakers brief, and has to do with looking at fashion illustration.

A friend introduced me to Pinterest, which is fab (if you're on there, I'm Debbie Lough, obviously).  If you're not familiar with it, it's a sort of online bookmarking site, where you can create 'boards', and see what's on other people's boards.

And over Christmas, (and 'not well' time), I've been working on a Cafe Press shop for my artwork.  I have a ton more stuff to add, but my shop is here http://www.cafepress.co.uk/debbielough
I'm also putting together a Printfection shop, which will have the same designs, but a slightly different product range.

I'm also working on expanding my Etsy shop (which I've been meaning to do for the last few months).  I'll slowly be adding things, both available to order, and stock pieces, over the next couple of months.  If you haven't seen it yet, my Etsy shop is here http://www.etsy.com/shop/DeborahLoughCostumes


And that's it for now.  A bit of a dull week, but more of the stuff I'm working on later...
Posted by Deborah Lough at 1:18 pm No comments:

I just realised that I never posted about my second hatmaking brief.

That's very bad of me, and I will slap myself on the hand, because it was finished in November, and displayed at the Knitting and Stitching Show, at Harrogate, on the college stand.

The brief title was 'Where in the World'.  It was all about using visual communication, and communicating ideas through design.

We each had to pick a country, research it, and produce a hat that communicated the country of choice to somebody looking at it.  The example given was the hat worn by Catherine Middleton in Canada, with a Maple leaf on it.

Just to make things a smidge harder, we had to focus on a style that might be made by, or that was inspired by the work of, Christies (the famous hat makers).

I instantly decided I wanted to base my hat on Russia (in all its variations over the years, both Soviet and non-Soviet).

I started by collecting lots of images - anything I could get my hands on - and massive thanks to the friend who sent me lots of pictures, and her little book on the Moscow Metro (she knows who she is).  I also collected written information - internet news reports, wikipedia and BBC archive entries, newspaper articles, etc, etc - I also made notes every time Russia was mentioned on the TV or radio (I still feel as though I should be taking notes now, I managed to get so engrossed in it)!!

After a while, I started to hone in on a number of things - first, there were lots of bits of information coming up, over and over again, about things within other things - Faberge eggs opening to reveal hidden riches - Maryoshka dolls opening to reveal new layers - the way that Russia wants to be seen one way, but when you pull back the curtain on that, and look at how it actually is, it's completely different.

So I decided I wanted to use one shape within another.  Looking at Christies' website, I realised that a lot of the shaped they use are very traditional - a lot of bowlers and top hats, etc.  And then the basic shape came to me - a bowler hat within a top hat, with the top hat somehow cut away to reveal the bowler.


I was struck by the massive wealth and opulence, not only of the Csars, but of the soviet leaders too, contrasting bitterly with the desperate poverty that existed.
I listened to a radio interview about the Arctic Convoys during World War II, and that led me onto the siege of Leningrad, and the massive deprivation and horror that those people endured.
I felt as though I had to try to portray something of the horror that ordinary people lived through.  It sounds foolish, but I felt I owed it to these people I'd never met.
Of course, that horror doesn't just refer to the sieges of WWII.  There was massive degradation and depravity during the soviet era too - through the days of the Gulag (I took a book on the Art of the Gulag out of the college library, and it was graphic, horrifying, and stomach turning) - and right up to the corruption of today.


Five images influenced my colour and material choices.
1. A picture frame by Faberge, in dark red enamel and gold.
2.  A pair of 19th century peasant shoes, made of roughly woven straw.
3.  The modern double headed eagle emblem of the Russian Federation, which is gold.
4.  The original double headed eagle of the Csars - which was black.
5.  A picture of a large hammer and sickle adornment in Moscow.


It made sense to me that the top hat part of the hat should represent the wealthy side of the country, so I lined the underside of the brim in dark red silk, and edged it with gold braid.
I used a black felt to represent the black eagle emblem of the Csars.  And I hand embroidered a modern double headed eagle in gold and silk threads.
I made one small change to the eagle itself - on the shield over its stomach should appear St George on horseback.  I replaced this with a hammer and sickle.  My thoughts on that that it shows that although outwardly things appear to have changed, the Soviets and their ideals are as present as they ever were.

Once the hat was together, I completed the 'wealthy' side by adding a pleated, but frayed, band of red silk - the idea behind that being that it shows the fragility of wealth in Russia (say the wrong thing or support the wrong person, and it could all be gone, no matter how powerful you think you are).

Moving on to the 'poor' side...  I wanted to use quite a rough straw, not a fine sisal or parasisal.  So I used an old straw hat that I'd damaged last year and still had.
To show the horrors, I decided to distress the straw - I buried it, squashed it, burned it, and poked holes in it.  I also dripped nail varnish down from the holes, and let it run down the hat as though it were blood.

I didn't want all the poor side to be bad, though.  My friend had sent me some pictures of some women in traditional dress, very brightly coloured, dancing in Red Square.  To represent them I attached some bright red linen behind the holes. 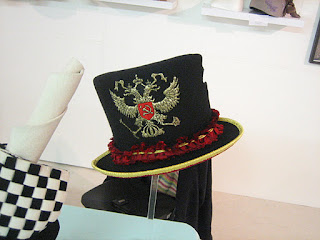 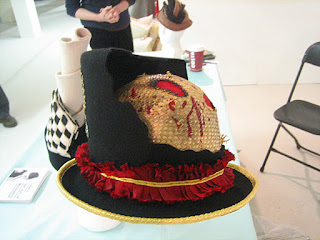 On display at Knitting and Stitching. 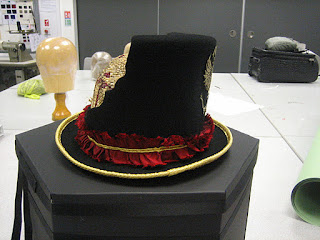 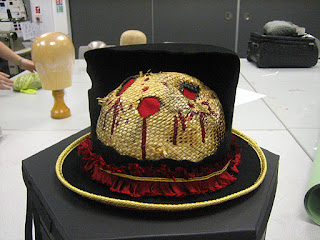 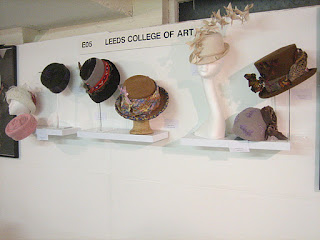 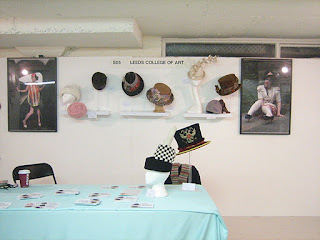 And everybody else's hats on display.
Posted by Deborah Lough at 2:22 am No comments: