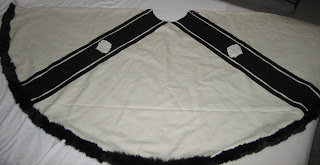 The bride's own family colours in red and white: 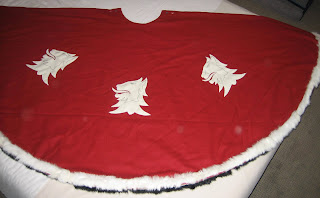 (Photos taken on the spare bed in our hotel room!! Sorry!)
When she arrived for the ceremony, the bride was wearing the cloak with her colours exposed.  After the ceremony, she turned the cloak around, so that her new husband's colours were visible. 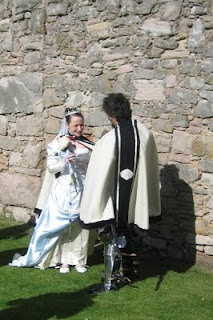 The 'badges', or motifs on the cloaks (on both sides) were cut from white wool (Hainsworths again).  The black detail on the badges is sewn on in black thread.  I originally stated doing this by hand, using backstitch.  Unfortunately, I was running short of time towards the end, so I had to do some by machine. 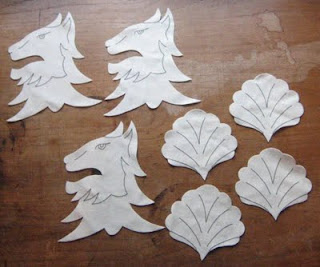 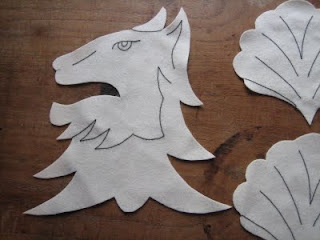 And no, I can't tell any longer which were by hand and which by machine, either!
Posted by Deborah Lough at 1:22 pm No comments:

A couple of sun hats I made recently, on a day off, (don't worry, I don't get many), and very much on a whim!
The first was made of denim, taken from a pair of old jeans.  The brim has some buckram in it to stop it from flopping completely.

The flower decoration on the side is made up of layers of denim, and a pretty floral print cotton fabric - the same cotton lines it.  The centre of the flower is a pewter button.﻿
﻿
The second is made of navy blue and white striped cotton, with a 6 panelled crown (like the denim one).  The zig zag shaping of the stripe is created by cutting the panels on an angle.
The brim has some buckram in it, again, and it's lined (and the brim faced) with white linen.
﻿
All of which brings me onto a wee bit of news...
A few weeks ago, I applied to study millinery, part time.  And today I was offered a place on the excellent course at Leeds College of Art.  I'm incredibly excited about it, and can't wait for it to begin.
In other words, watch this space for more hat stuff over the next couple of years, modern and historical!
Posted by Deborah Lough at 2:55 am No comments:

A couple of years ago, the charity 'Help for Heroes' released a fundraising DVD containing clips from war films - titled 'Heroes: The Greatest War Movies Ever!', compiled from film industry archives.  (All profits going to Help for Heroes.)
Nigel bought it, as anybody who knows him would expect - he supports the charity as a matter of course, and the fact that it's about war films didn't hurt.  :o)
Anyway, we sat down to watch it one day, and in the introduction, given by Andy McNab, from the National Army Museum, he takes a red military tunic from a rail of uniforms, and puts it on.   Obviously, you only see the back of the tunic, so that McNab's face isn't revealed (he's still in a form of hiding as a result of the 'sensitive' work he did in the SAS).
Nigel called out suddenly, and I thought something was wrong....  No - he was drawing my attention to the tunic, and to the others on the rail.
'What about them?' says I.
'Er, you made them,' says Nigel.
OOPS!  After much convincing I realised that it was one of a number of 'generic Victorian' military tunics that I made for the NAM.  Yikes!   And somebody who's properly famous (if not under his real name) was wearing it.  And it was on a DVD!  Double yikes!!
I should add that it's not unusual for me to fail to recognise my own work when presented with it.  Probably seems very odd to people when I invest such huge time into making each piece, that I don't remember every one - but there it is, I don't.  I always assume it's somebody else's work - a psychologist would probably tell me there's some deep seated self confidence 'issue' or something!
What I find particularly interesting is that there are a number of other costumers and 'supplies companies' (for want of a better term), who have claimed to have made the tunic worn in the DVD.
My first reaction to that was annoyance, obviously, but on reflection I find it quite funny that there are people out there who find such things (claiming others' work as their own) to be necessary!   (Oh, and in case anybody thinks I'm doing the same thing, I have the purchase orders filed away.   ;o)   )
Anyway, I don't have pictures of the scenes from the DVD (they're definitely there though), but here is a pictures of the tunic that McNab wore in the DVD.

The tunic's not historically accurate as such - the cut is correct - but the museum specifically requested that there be no rank markings or regimental details, because they didn't want to be seen to be singling out one regiment for inclusion, while leaving out all the rest.
And there were khaki drill versions too: 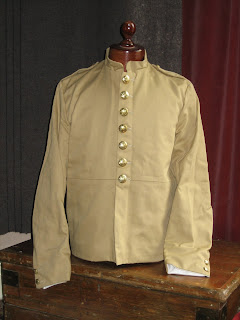 My work really does crop up in places I'd never expect it to!
The link is above, but it's worth mentioning again, the Help for Heroes website is here http://www.helpforheroes.org.uk/
Posted by Deborah Lough at 12:25 pm No comments: