You might not be aware (I didn't shout that loudly, was too busy), but I had to move out of my lovely studio in The Art House, so that they could redo the ceilings.
(Long drawn out story involving them not being done properly first time round, a building company gone bust, and the High Court...)

They had to put scaffolding up to reach my nice high ceiling, so I got booted out for the duration.
That was back in August (offhand), and I've been split between two smaller studios ever since, working in one, and storing stuff in the other.
Which was somewhat chaotic, because the floor space in the two little studios didn't really match the floor space in my bigger studio, so the one used for storage was crammed with stuff (literally, just stuff... stuff everywhere), and the one I was working from was a bit of a tight squeeze for the cutting table and the sewing table to both fit.

But now I can move back in!  And the ceiling does now look spiffing - and apparently this time it's properly done, so no more cracky flaky paint!!
This is what my studio looked like for the duration (my actual studio, not the ones I was working / storing stuff in).  Yay. 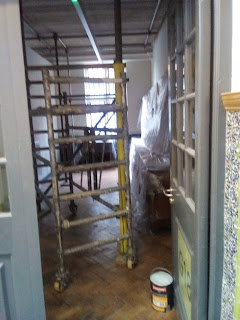 I did have a slight hitch when I couldn't move out of the working studio, because they put scaffolding up outside ahead of schedule, so my 'moving back window' disappeared.
Though the most 'interesting' part of that was the day they'd put the scaffolding up while I was in there working while wearing noise cancelling headphones, and came out to discover scaffolding going straight across the door, at chest height.  (After I shimmied and crawled out, I went and reported to the office, and the lovely buildings manager had them shift it first thing the next morning.)
But it was strange being met with this on opening the door (that door on the left of the second picture - that's my temporary working studio, that is) : 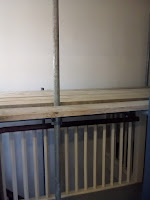 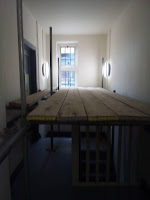 BUT.... (drumroll, for drama), I'm now back in my own studio, and have handed the keys back in to the temporary studios!  Hurrah!!  (This post has taken me a couple of days to write, during breaks between shifting stuff.)

The hitch being (there's always a hitch) that my own studio looks like this:

Pickle, the purple millinery mascot is hiding, because it's all just too much for him... 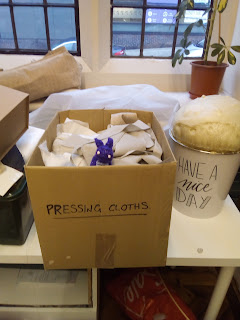 So...  Nice to be back in my own studio, with my nice glazed doors and less traffic noise...  But oh my lord, the tidying (argh).

So that's what I'm off to get back to.  MORE tidying and sorting and putting away.

Oh, and I'm told that in the rest of the building, the flooring has to be covered with an epoxy, because the scaffolders scratched it.  That'll be happening in the next few weeks.  Thankful to say I won't have to move again for it, since they took extra care on my parquet floor, though the floor going directly up to my door will have to be done.

Posted by Deborah Lough at 4:15 pm No comments: