This is for a permanent static display, created by a sculpture company, for a museum in the Channel Isles.

The stuff was actually delivered a few months ago, but I got the photos from the client a few weeks ago.  Forgive the background - it's not 'in situ' yet, and these are taken in the sculptor's workshop.

I made (or obtained!) the stuff for the figure on the left of the picture, with the blue gambeson. 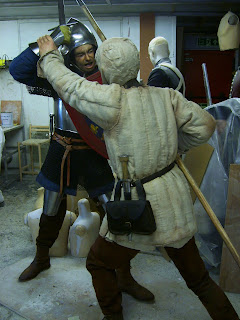 There's a shirt, a gambeson (the blue), and a pair of hand sewn hosen. 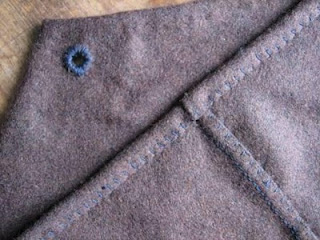 The backseam is handsewn using backstitch, and then the seam is sewn down a second time, and the hems made, using a variation of whipstitch.  The eyelet is reinforced with an internal metal ring.  The photo has been lightened a bit to allow the stitching to be seen! 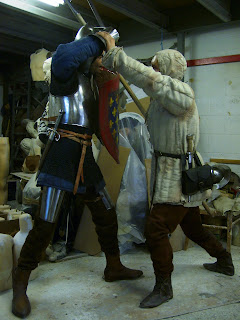 Posted by Deborah Lough at 5:26 pm No comments:

I've long been a fan of the costume designs done for the Ballet Russes, in the teens and twenties of the last century particularly.

Now the V&A (Victoria and Albert Museum) are holding an exhibition on Diaghilev and his Ballet Russes.

I love that Diaghilev collaberated with some of the greatest artists and designers of the time, including Chanel, Matisse, Picasso, etc.

My favourite have to be the designs of Leon Bakst, though - they're just so full of colour and life, like these ones.  (And check out those chopines on the red design!) 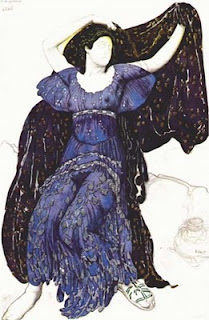 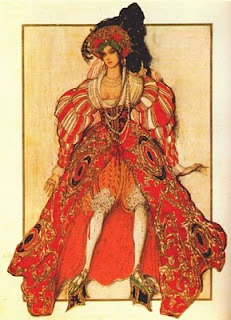 The exhibitions full title is 'Diaghilev and the Golden Age of the Ballets Russes, 1909-1929', and it runs until 9th January 2011.  As it's a special exhibition tickets cost around £10 for an adult, although museum entry is free.

http://www.vam.ac.uk/collections/theatre_performance/diaghilev-ballet-russes/index.html
Posted by Deborah Lough at 12:28 pm No comments: