...is now finished and in for marking.  I don't have any pictures of it completed yet, because I managed to make the deadline for the college brief clash with a work deadline, and had no spare time for photographing, so it'll be a few weeks till I can take some.

Anyway, until then, some more 'in progress' photos that I haven't shared yet... 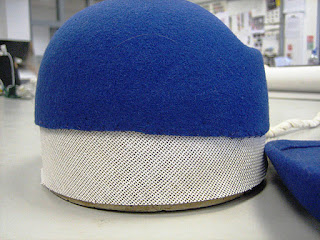 Firstly, my crown.  I decided to use a quite classic crown block, with a little dip at one side (originally I chose a more squared, flat top crown, but changed my mind before blocking).
As part of the challenge of this brief was to learn how to make a whole hat from one hood (or hat blank), it wasn't a problem that I didn't have enough felt  left to block the whole crown.  I used buckram to extend the crown to the full height of the block.
Obviously, the other option would have been to make a hat with a shorter crown, but I wanted to learn how to extend it, so decided against that. 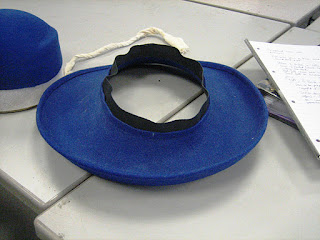 Next picture is of my brim, all ready to add to the crown, with the headfitting petersham all sewn in.

And finally, the silk that I used for the trimming.  This is a slightly off-white china silk - originally I'd planned to use it as it was, but it just felt too broght when applied to the hat - so I decided to dye it.  I dip dyed the two pieces by hand, having first rolled it and tied a bit of ribbon round it to give the colour a little texture.
As I said, more pictures to follow of the hat after it's been marked (eek!!!).
Posted by Deborah Lough at 12:27 pm